Learn About Our Workshop 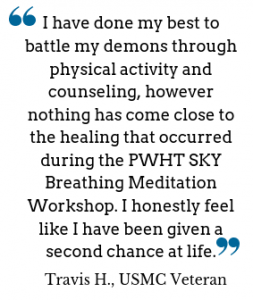 According to the Veterans Affairs Administration, veterans filing disability claims for PTS(D) has tripled in the last decade from 345,000 in 2008 to 940,000 in 2017. Veterans of previous conflicts continue to experience symptoms of post-traumatic stress (PTS).  The National Institutes of Health estimate that, of the approximately 2 million veterans returning from Iraq and Afghanistan, up to 20% suffer from post-traumatic stress or PTS. Veterans of previous wars may also continue to experience symptoms of PTS.

PTS is an anxiety disorder that develops as a result of exposure to a traumatic event and is characterized by three categories of symptoms.

Moral injury, the psychological injury of having done, experienced or witnessed something against one’s moral code, is considered the signature wound of the recent Iraq and Afghanistan conflicts.

“The diagnosis of PTSD has been defined and officially endorsed since 1980 by the mental health community, and those suffering from it have earned broad public sympathy and understanding. Moral injury is not officially recognized by the Defense Department. But it is moral injury, not PTSD, that is increasingly acknowledged as the signature wound of this generation of veterans: a bruise on the soul, akin to grief or sorrow, with lasting impact on the individuals and on their families.” – David Wood, A Warrior’s Moral Dilemma, Huffington Post.

Veterans Deserve Better Than a 50% Chance at Recovery

Traditional treatments for veterans’  PTS are currently insufficient. Many veterans drop out of traditional therapeutic treatments because the process of recounting traumatic events is emotionally taxing. They often fail to continue drug treatments due to the drugs’ side effects. Research is showing that the only FDA approved drugs for PTS (i.e. SSRIs) are not helpful in addressing PTS. A recent study shows that of those veterans who actually undergo an entire course of treatment, only 50% show signs of recovery. There is clearly an urgent need to provide alternate methods of helping returning veterans reclaim their lives.

A man or woman with the courage to face war does not easily embrace the role of a victim with a diagnosis be it insomnia or PTS. Rather than depending on a drug or therapist, veterans value learning tools which they can use to help themselves. The Power Breath Meditation Workshop allows veterans to regain a sense of self-mastery and control because they can self-administer the techniques. Research shows that these programs are effective, safe, prevention-based and free of known side-effects. They can be scaled up to serve large numbers of veterans at a lower cost than many traditional interventions.

Do I need to have PTS to benefit from the Power Breath Meditation Workshop?

Veterans, active duty military members, and their immediate family with or without trauma can benefit from our workshops. The Power Breath Meditation Workshop teaches tools that allow all veterans to be at ease, focused, and calm in any circumstance, civilian or military.